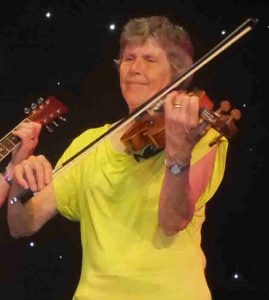 Moira Gutteridge has been playing for dances for over 30 years along with Peter as 'Dampier's Round'. They have played at all the major festivals, including Whitby, Eastbourne, Sidmouth and Broadstairs, as well as several Dancers' Weekends (including the first one), and other Folk Camps. They are in demand to play for club dances all over the country throughout the year. They run successful music workshops based on their experience both as players and trained music teachers. Moira plays fiddle, keyboard and harp. Their music inspires people to dance well due to the phrasing and rhythm they put into the tunes, as well as the lyrical harmonies written by Moira.

Our first Folk Camp experience was when we went to a weekend camp that was held at Norton, near where we live. We enjoyed it, so went to summer marquee camps with our children.

Mostly we enjoy meeting others, helping people enjoy themselves. Watching the children make friends with other folk camping children.

My favourite part of Folk Camps used to be being on breakfast duty, because that meant the rest of the day was my own. Now we enjoy playing for the Dancers' weekend or help run the Musicians' camp.

My best Folk Camp memories are playing as a family band at the camp concert, pretending we were all injured, so needing two people to play each instrument. Helping build the marquee floor the year when it didn't have one. Meeting up with the same friends year after year, and their grown up children.

I like to use my ability to inspire others to achieve musical performances they did not believe possible. Leading the evening band.

We volunteer as musicians at Folk Camps because it's something we feel confident with and can do well.

We are ex music teachers, so used to running groups, large and small with a cheerful, encouraging manner. We played as 'Dampier's Round' for 30 or more years at Folk Camps, Festivals, holiday weeks, dancers' and musicians' weekends dance clubs, as well as Barn Dances and Ceilidhs. We have run workshops for adults and children at festivals, Halsway Manor, Folk Camps, club weekends. We ran Chippenham Festival Big Band.

When we are helping, people can expect a jolly good experience, and enjoyable workshops from a knowledgable team. A safe environment to be with their families.

Here is where Moira will be a member of staff this season. Follow the link to find out more.
Musician : Dancers weekend Beckford, Worcestershire