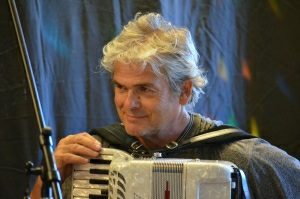 Richard was introduced to folk music through Folk Camps. Richard plays currently accordion and piano with Climax Ceilidh Band and Moltenamba, and in the past played in Meridian and Angles. Before that he played bass guitar and piano in a number of rock bands including Climax Blues Band and Principal Edwards.

Expect his music workshops to bring in lots of different musical influences and to develop into glorious arrangements, which have a place for both beginners and experts.

In the evenings, his driving rhythms on the accordion lead to ceilidh music that is great to dance to.

Here is where Richard will be a member of staff this season. Follow the link to find out more.
Musician : Spring BH weekend Chedworth, Gloucestershire
Musician : Marquee week 5 Rolvenden, Kent