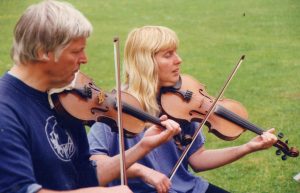 My first camp was in 1968 and I first volunteered as leader at the Double Locks Youth Camp. After many years of leading Youth Camps I then went onto lead craft and then family camps. I have also catered, been musician and warden.

I became Equipment Manager for the Society in 1986 and continued in this post until September 2014.

I play the violin, melodeon and guitar and enjoy the musician workshops at camps. I'm looking forward to working with Simon Reynolds and Paul Weir as we 'go back to the mists of Folk Camps time'.

In 1995, I was particularly pleased to produce a core repertoire tune book for beginner to intermediate musicians who wish to play for dancing. This book 'Play in the Band' was sponsored by Folk Camp Society and I'm pleased that it is still being used and that David Pattenden is now adding second parts to some of the sequences.

My aim as warden is to deal with any problems quickly and efficiently. Over the years I have dealt with a range of situations and am always impressed by the camaraderie of campers and their ability to cope with extreme weather conditions (as long as the meals are served when expected!). I often wonder if some of the youngsters on camp will be wardens of the future as they are always interested in what the warden is doing- especially if it involves rescuing an implement from the washing up pit!

My favourite part of Folk Camps is meeting up with old friends and making new ones and seeing the youngsters of earlier camps now taking on staffing roles. I am always impressed by the variety of talents campers bring, which makes every camp different.

My main involvement was in the 1960's and 1970's as Chairman of London EFDSS, on the management Committee of Cecil Sharp House and Director and Secretary of The London Folk Festival.

I call and play the melodeon with 'The Haymakers' for barn dances as well as calling with other local bands in the South West. As well as folk, I also enjoy jazz, medieval and classical music. I am currently conductor of two classical orchestras in Cornwall.

Here is where Barry will be a member of staff this season. Follow the link to find out more.
Warden : Session weekend Miserden, Gloucestershire