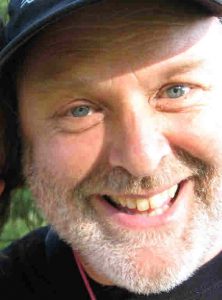 Paul led his first camp in 1976 and he hopes he's getting the hang of it now. He's always been open to diverse musical styles and an injection of humour. In 2012 the entire camp conspired behind his back to stage a rebellion and change the party theme. He was of course devastated to have his authority usurped in this way. 🙂

With a broad family-friendly appeal and a warm welcome to first time campers, Paul's camps have been responsible for converting many hundreds of newcomers into committed folk camp regulars. He enjoys organising extra surprises for the camp such as boat trips, steam train excursions, a picnic in the woods, pub music sessions, beach trips etc.

How and when were you first introduced to Folk Camps?

I was on a Holiday Fellowship Folk Week in Sussex (which was brilliant). The leader Dave Lloyd kept on plugging Folk Camps, so I booked for 2 weeks the following summer. I went to Slapton i1972 on camps led by Jim Reynolds and Hugh Rippon. I was inspired by both and could no longer imagine life without Folk Camps.

I also went on to get involved in the camps of Mains Unies in Belgium and France, as well as leading the first ever German camp in 1980. I love meeting people from other countries.

What do you enjoy most about volunteering as Folk Camps staff?

Being able to shape and steer the style of the week and encourage people to share their talents with everybody.

What is your favourite part of Folk Camps?

The unexpected. Something that happens out of the ordinary, a shared moment, a joke, a stunning performance, 100 sheep running across the field, triumph in the face of meteorological adversity. Beautiful places. Making lifelong friendships.

What is your best Folk Camps memory or experience?

Too many to recount, and I'm not sure I can remember them! One standout was doing a late evening at an August Bank Holiday camp at Long Compton with Harry Mousdell, Chris Jewell and Phil Harnett where magic happened and the music took off. It’s been a joy introducing my kids to Folk Camps from birth and seeing two of them (Emily and William) become staff. I will be at the same camp with all 4 of them in the summer plus 2 grandkids!

What do you bring to this volunteer role?

Experience, a willingness to chart new territory, an ability to encourage other people to share their skills, and being open to new experiences. And quite a lot of behind the scenes organisational skill.

Why do you volunteer as a leader?

Because it's something I can contribute, I enjoy it when it goes right and I like making people happy.

What is your folk background?

I've been calling with ceilidh bands for almost 40 years, some very well known and others unknown. Nowadays most of my work is calling and playing with my regular trio, Brand F and we occasionally expand the line up with players from some of the best bands on the Bristol scene as well as two of my own progeny - Emily and William. I always enjoy calling with new bands because I like the element of the unknown.

What instruments do you play?

What can people expect at your camps?

Most of their favourite activities, garnished with a touch of the unexpected.

Here is where Paul will be a member of staff this season. Follow the link to find out more.
Leader : Marquee week 3 Rolvenden, Kent