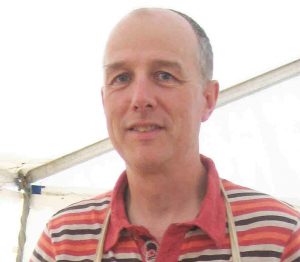 Back in 2005 I was a refugee from the Sidmouth and WOMAD Festivals. One was cancelled and the other left the town that I live in. I typed "Folk Camp" into Google and up it popped. I arrived with two kids in tow a day late from WOMAD festival and was greeted by the sound of lots of children playing the tune "Jimmy Allen" coming from a large white marquee and a warm welcome from the warden. I'm still coming and I still can't get that tune out of my head. I built up gradually from one marquee week to two and then a couple of bank holiday hall camps as well. I have even managed to persuade my wife to come along occasionally and she's more of a Phil Collins fan.

The kids are still coming too but they have grown up so being the Warden gives me something more to do. It's a great job chatting to folk campers all day and only becomes onerous when it rains or the plumbing fails and I fix it before the campers notice. I'm old enough now to have done my time on the Folk Camps' management committee but still young enough to climb onto the roof of the marquee to fix a leak. My career highlight was working as a grave digger in the hot summer of 1976: a skill that comes in surprisingly useful as a warden. I ride a bike which means I can get round the field in search of volunteers faster, so watch out! I'm also last to bed so know who snores louder than me on the campsite.

As a "Folkie" who can't play or dance, my favourite tradition is the hour dedicated to "song circle" most evenings after cocoa. I don't perform myself but enjoy what my younger daughter calls the "circle of talent". It's a break from the Ceilidh and the bit that's most like a folk club. It's a great opportunity for young people to perform to a friendly crowd. After that I even find I'm in demand on the dance floor once all the good partners have been bagged and someone doesn't mind dancing with my two left feet.

When I'm not helping out the Folk Camps Society I'm a part time cycling instructor working in Primary Schools having taken early retirement on the grounds of laziness. When I'm not on duty I'm out exploring the countryside on my bike or walking the dog. As for parenting, I'm past it.

Here is where Sean will be a member of staff this season. Follow the link to find out more.
Warden : Spring BH weekend Chedworth, Gloucestershire
Warden : Marquee week 5 Rolvenden, Kent