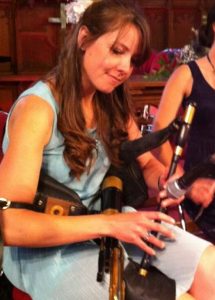 Born into a folk camping family, Sarah has been attending Folk Camps since she was a baby, and grew up surrounded by music and dance. She attended Irish dancing classes as a child and honed her talents as a caller in her twenties. Sarah learned to play the flute at school and influenced her teacher to the extent that eventually the usual classical repertoire for music lessons was replaced by jigs and reels. Later she took up the Uilleann Pipes and low whistle. You can hear both instruments and some of her new tunes on the two CDs - part-funded by the Folk Camps Development Fund – performed by the band M4trix, a small ensemble of folk campers. Currently Sarah plays in barn dance bands Pinkers Spinney, Pamplemousse and in a duo, Saturday Sun.

Here is where Sarah will be a member of staff this season. Follow the link to find out more.
Leader : BH weekend Meonstoke, Hampshire