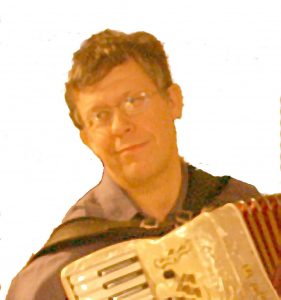 Shane came into the Folk Dance World via Folk Camps and Morris dancing in his late teens. He was always at the centre of musical activities in school, playing viola, guitar and percussion, and at church, as a keen bell ringer, he rang a Quarter Peel aged 10. He took up the accordion in his 20's and played in a classical accordion band. When he met Julia he became a member of Wild Thyme Folk Dance Band and now plays in Keeping Thyme, Contradition and as the duo Shane and Julia. With these bands he has played, in America, Sweden, Holland, France, and in England at Sidmouth, Chippenham, Eastbourne, Whitby, Broadstairs and Southam Festivals. Shane has taken part in several recordings, managing to play and engineer at the same time and has made some of his own PA. He is a design engineer by profession. Shane joins Julia in teaching music workshops at Folk Camps and to local players groups. He is particularly good at getting beginners going with some basic techniques and instilling them with confidence.

Here is where Shane will be a member of staff this season. Follow the link to find out more.
Musician : Musicians weekend Beckford, Worcestershire