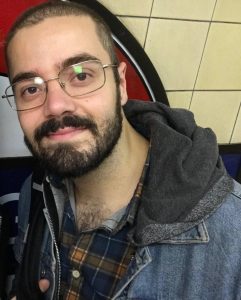 I started Folk Camps around 2013, and now it is always a must for every summer. Everyone was so welcoming and had such a fantastic community spirit, I was instantly hooked – it’s great to get away from the city for a week or two to dance and play music, as well as see all the friends I’ve made over the years. I’ve always done my best to contribute as much as I can every camp, and being a leader just seemed to be the next best step to do that.

When I’m not rolling around in a field, I’m working in publishing in London. I’ve done a decent amount of acting, writing and singing in the past, and can play ukulele (a little) and harmonica (even less); I also DM roleplaying games, which, at this point, is too big a part of my life not to mention. I’ve also started on doing a decent amount of calling, too. On the whole though, I don’t really come from a folk background. I love folk in all its forms all the same, but because of that I tend to bring a bit of an extra twist to things with more modern folk artists and music, and also a little bit of rap and spoken word thrown in for good measure.

At the end of the day, Folk Camp for me is about reuniting with friends, sharing stories, songs and dances, discovering music and culture old and new, and kicking back to have a really great week that you spend the rest of the year reminiscing about.

Here is where Anthony will be a member of staff this season. Follow the link to find out more.
Leader : Marquee week 2 Rolvenden, Kent