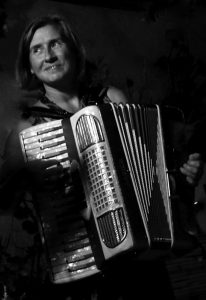 I have worked as a professional musician for many years, having done my first paid gig at the age of twelve! I am a classical pianist but learnt the accordion as a child to play the Ukrainian music of my father's heritage. I continue to play this style with the band Lebedek. Later I became interested in English folk music and play for ceilidhs and morris sides. I’m a music teacher with both LLCM and ARCM qualifications, and have been the Musical Director for several drama productions. I also run a Community Choir in Northampton.

I first heard about Folk Camps a few years ago but seeing the Folk Camps Party Band perform at Towersey Festival this year made me really interested to come along. I am particularly pleased that my daughter is also very keen and I am thrilled to be able to make a positive contribution as a musician.

Here is where Katrina will be a member of staff this season. Follow the link to find out more.
Musician : Marquee week 4 Rolvenden, Kent