Many of the people that come to Folk Camp have many talents related to folk music, song and dance. Often these skills have developed as a result of what they have learnt from others at Folk Camps.

Some people have major musical or arts achievements and careers outside of Folk Camps. But for many their folk experience is something that they do in addition to their ‘day-job’.

At a Folk Camp, you get the opportunity to play music with many talented people. And it’s not just the staff of Folk Camps, but many others too.

Here are a few of them. 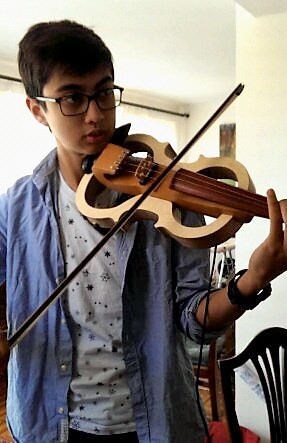 A relative newcomer to Folk Camps, Jon was eight years old when he attended his first camp with his family. He had just started playing the violin and got stuck in right away at workshops and seemed very at home at Folk Camps. He has been to Folk Camps every year since then. His participation in music outside Folk Camps has gone from strength to strength: he spent 6 years as part of the Hampshire County Youth Orchestra and also developing his singing in Hampshire County Youth Choir. He also made himself an electric violin as part of his DT A-Level (shown in this picture).

Having displayed an interest in the work of the camp musicians at age 17, the following year he was an apprentice musician at a summer camp. His experience at Folk Camps has helped with his university application. His filmed audition piece was music arranged by Folk Camps musician Ben Thackeray, which Jon learnt at camp and featured him playing the violin whilst accompanying himself on the guitar. This resulted in a place at Leeds University’s new Folk Music degree in 2017 along with an Excellence Scholarship. Course tutors on this new course include Nancy Kerr who gives individual tuition to Jon each week. 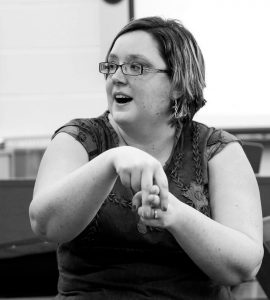 Cat Kelly has been a Folk Camper since before she was born!
We have had the pleasure of her singing workshops, her talents as a caller and her skills as camp musician.

Outside Folk Camp, she founded the Oxford Folk Festival, runs singing workshops and community choirs and works with children and adults with special needs. She is a qualified Makaton tutor and combines Makaton with singing in a unique manner.

Please come back to this page another day to find more additions.

Find out more about Folk Camps.