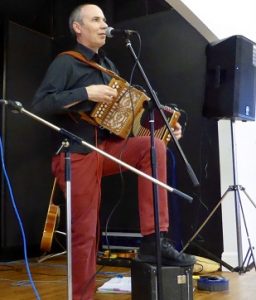 Chris has been both a Folk Camp leader and musician, and staffed his first camp in 1979 at the age of 18 as a musician at Cartmel. He has played in and led many bands since then, and is equally at home calling or playing for a 'circuit' ceilidh, or for the local EFDSS group dancing Playford. He mainly plays melodeon at camp, but fiddle was his first instrument and he can often be found singing and playing guitar late into the night.

When Chris is musician, the morning workshop will usually start with 30 minutes from the 1st section of ‘The Unexpected Polka’ tunebook that he compiled with Alastair Gavin during 2021, before moving on to more involved tunes. He will bring music sheets with him, and can accommodate transposing instruments if notified before the camp starts.

Chris is always keen to encourage big bands for the early evening music for dancing, and therefore all the tunes will be from either ‘The Unexpected Polka’ or the sheets that have been worked on in the morning workshop.

Here is where Chris will be a member of staff this season. Follow the link to find out more.
Musician : August BH weekend Meonstoke