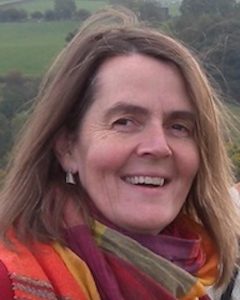 Clare got introduced to Folk Camps (Loxwood late May weekend 2000 was it?) by her brother Charlie Mee and was hooked immediately.

I just love getting involved and long before I was staff I would run singing workshops at any camp I attended.

I love that mini-community thing that each camp forms - there are often fewer than 40 people at a weekend camp and you're self-catering but it somehow very quickly becomes a temporary community of like-minded lovely souls and often ends up with group meals all round the site.

My best Folk Camp memories are of so many late-night singing sessions that I just love to be part of that community of listeners enjoying every contribution.

I've run singing workshops to get people singing, no matter how unconfident they might feel, since the 1990s (well, 1993-ish) and have collected a wealth of fab songs to learn in a group. My day job now involves doing only and exactly that in Kendal.

I guess I volunteered to lead just for the fun of it really. I also have a slightly missionary zeal about getting more people singing because it's just so healthy, enjoyable and generally good for us to do.

I've had what my friend once called a "horizontal career" - starting out in several fields - journalism, research, teaching, administration - and always getting qualified and enjoying my work and then, changing again, till finally I've settled on this singing-leading thing!

Here is where Clare will be a member of staff this season. Follow the link to find out more.
Joint Leader : Singers weekend South Miserden