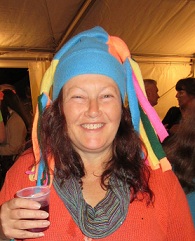 I think my first introduction to Folk Camps was a singers weekend back in 1998 run by Carolyn Robson. We sang all day and virtually all night for the whole weekend, and I loved it. I had finally found a 'home' for my singing voice even though I only knew 4 folk songs back then. Soon after we were on a week's marquee camp in the summer and I haven't looked back since. My family - husband and 2 daughters - were no strangers to camping as we are heavily involved in the Sealed Knot, a civil war re-enactment society ( but that's another story). Folkcamping however was clearly more civilised and relaxing, with an impressive range of meals from the camp kitchen, real flushing toilets, and showers (- well sort of).

I love the creative energy and enthusiasm, and the sheer fun of it all, with a high standard of musicianship alongside complete beginners of all ages. Everyone has that inner child somewhere, whether it be making dragon costumes out of bin liners, composing variations of the Angry Birds tune, learning to play tabor pipe and drum with a straw and wash bowl. I know quite a few folkcampers book for 2 weeks at a time, but I've not managed this yet. I've usually run out of steam by the end of the week through not wanting to miss out on the fun, whether it be the delight at breakfast of a bizarre chair sculpture created by the midnight camp fairies; listening to the rat-a-tat of teenagers clog dancing late at night; or singing ballads cocooned in blankets around the sloe gin bottle just as the sun rises.

My own folk interests now mainly centre around playing fiddle and singing in a few local folk bands and the active music session scene around where I live in South Bedfordshire. I do like dancing, but by the end of the evening you can usually find me drawn back into playing along with the band."

Here is where Sally will be a member of staff this season. Follow the link to find out more.
Leader : Early May BH Loxwood
Joint Leader : Hall week Welbourn